How Past Wind Farm Technology
Transformed Into Modern Energy

Wind is a powerful force. It can move everything from pinwheels and water to cars and buildings. Wind has also been used to create technology and is arguably one of the oldest human technologies.

As we move away from heavy reliance on fossil fuels, the future of power generation will likely involve fields of wind turbines. 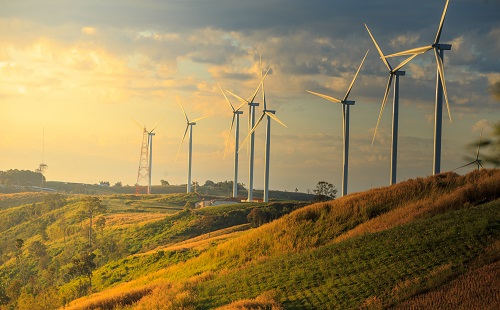 One of the earliest wind turbines was constructed by Professor James Blyth of Glasgow in 1887.

He constructed a windmill to charge a battery which he then used to power the lights in his home.

Glasgow tried to offer his services to power light to his local town but was denied due to a misunderstanding of the technology. It was believed that “electrical power was the work of the devil.”

It took almost a century for the modern, industrial-scale use of wind energy to take off.

An oil/ energy crisis that occurred in 1973 lead to the creation of the first modern wind farm in New England.

Constructed in 1980, this wind farm was a result of the Carter administration moving away from dependence on foreign oil.

Large wind farms consist of hundreds of wind turbines spread out over a large area.

According to studies, it is suggested that wind turbines can provide more than 40 times the current global electricity consumption.

The main challenge with this is finding the appropriate location for wind farms.

In order to have a wind farm, you need wide, open space, grazing land used for a certain kind of agriculture, and an average wind speed.

The faster the wind speed, the quicker the project will realize a profit.

There are a few advantages to offshore wind farms. Using the ocean wind as a resource opens up the area that wind turbines can cover. Wind can also be substantially stronger offshore. Here are a few additional advantages:

There are also a few disadvantages to offshore wind farms as well. These include:

How Are Wind Farms Transported?

Moving turbine blades, towers, and nacelles, from where they are made to another location, takes extensive planning. This planning often lasts more than a year.

The most common methods of travel involve using rail, road, and sea.

Traveling by road involves comprehensive planning that requires the removal of trees whereas traveling by train requires permits, which can take a while to be approved.

As wind farms become an increasingly popular mode of energy generation, logistics will have to be fine-tuned as well.

Wind is a powerful force. Although it can be destructive, it can be used for progress as well. There are advantages to using wind technology as well as disadvantages. Moving wind turbines involves extensive planning. Wind turbines, despite their drawbacks, represent the future of technology.

For more than 50 years, Reef Industries, Inc. has manufactured high-performance polyethylene laminates and composites of unmatched quality and value, like the Griffolyn® plastic shipping covers. They provide exceptional protection during transit or long-term storage. They are crafted from high-strength materials that have long provided the rugged durability necessary to effectively protect your investments during shipping and storage and are manufactured to handle the most demanding service and harshest environments.