Americans throw away about 230 million tons of trash per year for the country, which is about 4.6 pounds of solid trash per day. Less than a fourth of this waste is recycled, and the remainder is burnt or buried in landfills. Landfills are a modern invention where waste and disposable materials are stored.

Waste disposal in the United States is a balancing act. According to Trashcans Unlimted, approximately 53 percent of the nation’s municipal solid waste is handled by 1,908 landfill facilities.

More and more landfills are being dug near cities, so we will need to think of more ways to manage waste properly. 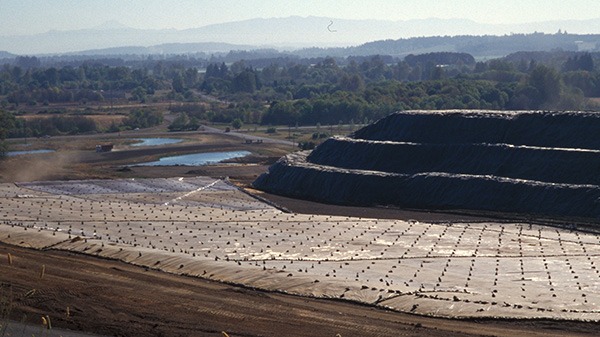 When Were Landfills Created?

Before landfills were created, incineration was a common method of trash disposal. Apartments had garbage incinerators in basements with a trash shoot system. This garbage and incinerator ash was used to fill low-lying wetlands and swamps near cities. Ash and garbage contaminated the groundwater. The prototype for the modern landfill was held in California in 1935. Workers threw trash into a hole and threw dirt on the trash from time to time.

About 20 years later, the American Society of Civil Engineers published guidelines for a sanitary landfill. The guidelines suggested compacting waste and cover it with a layer of soil daily to reduce odors and prevent rodents. However, landfills were placed on soil without a barrier or containment liner. This allowed the waste to pick up contaminants that infiltrated the groundwater.

The Office of Solid Waste, which was transferred to the US EPA in 1974, developed standards for sanitary landfills and closing or upgrading dumps to meet sanitary requirements.

How Do Landfills Work?

In the past, landfills were unmonitored, contaminated, and ridden with pests that carried all sorts of diseases. Landfills are now regulated by waste management employees who follow regulations that provide several guidelines for properly storing waste. Modern landfills use a layering system that isolates waste and monitors leaks and any other potential environmental pollutants.

Isolation is key to preventing air and water from being contaminated. In addition, a few byproducts of trash decomposition can be used to generate power, such as methane. This byproduct would ordinarily pollute the atmosphere but can now be redirected toward generating electricity.

The Importance Of Daily Covers

One of the most effective methods of landfill management is the utilization of landfill covers. Landfill covers are effective in deterring pests, preventing fires, limiting rainwater runoff, and controlling smells.  The first modern landfill in the United States, Fresno Municipal Sanitary Landfill, created the idea of the daily cover. Fresno Municipal Sanitary Landfill created many of the standard operating procedures that we use across the country. According to federal regulations,  landfill operators must lay a minimum of six inches of cover on their active landfills daily.

Daily landfill operations including regularly compacting loads of trash, depositing it in a large trench, covering it with fill from a trench nearby, and then moving on to the next trench. A few additional benefits of daily covers is that the trash is immediately removed from contact with the open air. This limits the possibility of fire and windborne pollution of the surrounding areas.

Although the “trenching” method is effective at limiting the harmful effects of trash pollution, it is not a perfect solution. More trash means more space for landfills, more workers, and more compacting and excavation equipment.

Trenching also leads to reduced air access which could impede rainfall evaporation and create a scenario where runoff could seep into the water table. This runoff is called leachate which is a significant environmental problem. In addition to this, the US could run out of room for landfills within 18 years which could potentially create an environmental disaster.

Landfills are a fact of modern life. They are an excellent alternative to what we have done in the past. Landfill covers are an important part of the landfill system. Landfill covers are capable of managing runoff and provide protection from weathering. Landfills are an effective system, however, they do come with a few drawbacks. There are effective recycling alternatives that can be implemented in the near future.

Griffolyn® products are a proven and effective means of managing stormwater runoff and providing weathering protection for prepared containment systems. Available in stock configurations up to 200’ × 200’ for immediate availability or custom fabricated to your specific site requirements.